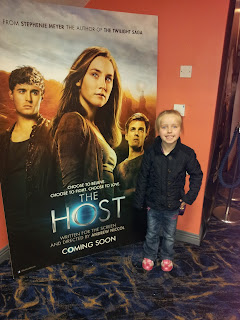 The Host, like Twilight, is another adaptation of a Stephenie Meyers’ novel. It is a science fiction movie written and directed by Andrew Niccol and stars Saoirse Ronan, Max Irons, and Jake Abel.

Following an alien invasion the earth is now at peace as an alien species called ‘The Souls’ have inhabited the bodies of nearly everyone one on earth. The society that has been set up by the Souls is similar to the one in Demolition Man, in which Souls generally don't lie to each other or commit crimes, and thus seem to trust each other unconditionally. There is a group of people called ‘The Resisters’ who have escaped being body snatched and are on the run.

Melanie Stryder (Ronan) is one of the rebels. She is captured by the souls and has one of the alien parasitic organisms implanted in her but unlike the majority of the planet Melanie’s subconscious survives and is floating around inside Melanie’s head along with that of her invader, a 1000 year old organism called Wanderer. She is fascinated by Melanie’s memories and her love for her boyfriend and brother so Wanderer brings Melanie to find her family. When she reaches the resisters they know straight away Melanie has been inhabited by an alien due to the distinct change of eye colour that occurs when humans have been invaded. Melanie’s family do not trust her as all they see is the alien. So the main gist of the film is can Melanie regain full control of her body and if she does what does this mean for her inhabiter Wanderer.

This movie is described as  science fiction but if you are a sci-fi fan and want to see this film for the alien body snatching content then you will be disappointed. The movie starts after the invasion happened so straight away loses most of the excitement that could have made this a better movie. One must ask themselves the question also that if these aliens are so peaceful and none violent then how did they manage to over-run an entire planet.  The movie is basically a love story with the typical Meyer’s equation of one girl two boys. It focuses on the relationships Wanderer forms as she learns what it means to be human and the relationship Melanie and Wanderer form. Ronan’s performance in this movie was next to none and over shadowed the other actors. It is a nice story but moves at a very slow pace and if it wasn’t for Ronan’s excellent performance I feel I may have lost interest along the way.

Teen Twilight fans may be more excited by this movie than I was. It was ok and passed a few hours but it definitely will not make it to my DVD collection. I give it 3/5 and feel it really only deserves two but I give it the extra point for an excellent portrayal of two characters in one by Saoirse Ronan. Science fiction fans stay clear, Twilight fans you’ll love it.