The Crypts Paranormal Investigation at Ross Castle with Down Paranormal 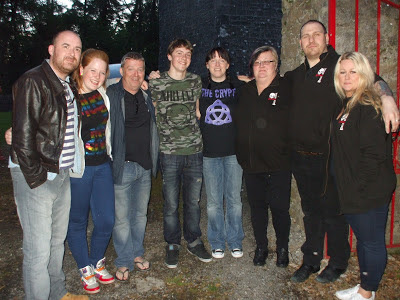 On Tuesday 18th of June 2013 I joined forces with Down Paranormal and a group of friends for an intimate paranormal investigation at Ross Castle, Co. Meath.

The castle was erected in the 1500's. At this time the Castle was inhabited by an English Lord named Richard Nugent also known as The Black Baron. He had a bad rep and was brutal to his people. His daughter Sabina (who was of ailing health) would spend her days by the shores of Lough Sheelin the nearby lake. Unlike her father she was a pleasant girl who was popular among the local people. One day while on a walk Sabina met a handsome young man named Orwin who was the son of an Irish Chieftain named O'Reilly. They chatted and upon parting promised to meet again. Now it was forbidden for the daughter of an English Landlord to be with the son of an Irish Chieftain so they began to meet in secret. They soon fell in love with each other and sadly this was a forbidden love. They knew their families would never approve of their love so they decided to elope. On the night of their escape they fled in a boat across the lake but a storm blew in knocking them off course, the boat overturned and while Sabina survived, Orwin tragically drowned. When Sabina realised her true love was gone forever she fell into despair and locked herself in the tower of the castle refusing to drink or eat. She then fell into a deep sleep and never woke up.

To this day the ghost of Sabina haunts the halls of the castle searching and whaling for her lost love and her Father the Black Baron's tortured soul is also trapped in these walls for his cruel and savage ways. 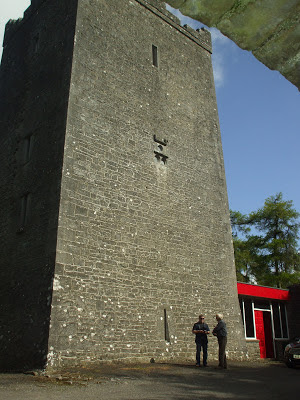 We had a fantastic investigation with Down Paranormal who are an extremely professional team who use both traditional and modern methods in their investigations. The following is an account of the night by team founding member Richard McCloskey-Wall:

So our first team investigation at Ross castle was,I think I can safely say was a roaring success. Activity began almost as soon as we stepped inside.

So much happened I hardly know where to begin. As Rita and her guests settled in we set up different experiments in almost every active room in Ross. We decided to do a full sweep using traditional techniques and also modern techniques too. We set up motion sensors in most rooms,static detectors in hallways laser grid in entrance hall,we also set up glass work in cradle room,a tuned out analog tv in the cave room (which gave great results) and a scrying mirror and franks box in the slasher room.
We began in the slasher room where we got the name Thomas and also our own names coming through. Also on the way up a dark figure was seen on the stairs.


After the slasher room we moved down to the cave room (this is where Sabina died) and some of us sat on the stairs outside. We heard clear loud footsteps on the stairs beside us,whispers and voices also where heard on the cave room some coming from the tv.

After hearing so much from the stairs we done a vigil on the stairway leading to the slasher room. Taps where repeated clearly,on request.Dragging noises where now heard in the cave room and on our return a sideboard had (very obviously ) been moved out from the wall. Temperature dips where felt and verified with digital thermometer and a shadow figure was seen crossing the slasher room door twice during this vigil.

We finished off with scrying which we all seen very visible results and a seance in which footsteps where heard and one of the groups hand was forced onto the table with such force we could see a pressure indentation on his arm.

All in all a great night with top notch activity and great company. Can't wait to return for more! 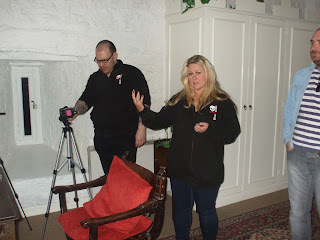