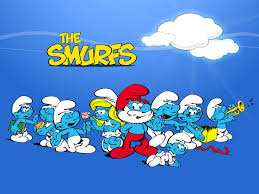 The Smurfs team up with their human friends to rescue Smurfette, who has been kidnapped by Gargamel since she knows a secret spell that can turn the evil sorcerer's newest creation - creatures called the Naughties - into real Smurfs.

The Smurfs 2 has not got the greatest reviews so far and the main argument in them has been that the plot was basically a bit stale. Come on…..it’s a kid’s movie…your characters get in trouble and then the day is saved. We generally know this before we go into a kid’s movie. Am I right?

Anyway I quite enjoyed this film. There were lots of hilarious one liner’s to keep you entertained and the movie has an overall message that it’s not where we come from that matters but who we chose to be ourselves. Azrael the cat provided a lot of the laughs and Grumpy doing his best Al Pacino had me laughing every time. We are introduced to two new Smurfs who were a lot of fun and I have to give special mention to Brendan Gleeson who I thought was hilarious.

The Smurfs is by no means in the top ten movies of the summer but it’s an enjoyable and funny movie which the kids will love and adults will get a laugh out of it too.