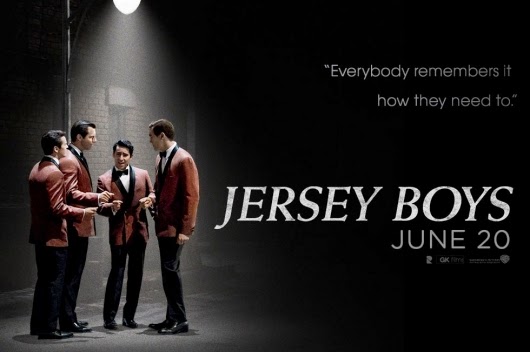 The Tony Award winning musical Jersey Boys has been entertaining audiences for almost a decade now with the common opinion that you go for the music and stay for the story. Well this is certainly the same with the movie version superbly directed by Clint Eastwood.

The story is narrated by each of the members given their version of the history of the group, as it says in the tagline of the movie....'Everybody remembers it how they need too.'

I have loved the music of this band since I was a child but I never really knew their story so I was glued from start to finish. I won't ruin it for you by giving away the plot but it made me quite angry how the break up of the group came about and it should never have happened. With well known hits such as Big Girls Don't Cry, Sherry, December 63 and Walk Like a Man, I could not sit still in my seat, head, legs, shoulders, everything was on the move lol.

There was lots of great one liners and I found myself laughing out loud quite a bit. My stand out performance had to be Vincent Piazza as Tommy DeVito and of course Christopher Walken was his usual awesome, cool as a breeze self.

Those moments when people were at their lowest were executed very well and a tear was brought to my eye a number of times. The price of fame is a luxury I'd rather not afford.

If you love the music of the Four Season's, hell even if you don't, do not miss seeing the movie on the big screen. The movie ends with a fantastic medley performed by the cast and my foot is tapping here just thinking about it. GO SEE IT!!!!