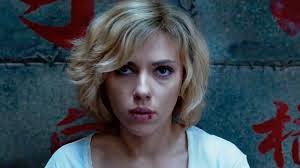 
Lucy tell's the tale of a young girl in Taipei. She is tricked by a guy she has only been seeing for a week into delivering a brief case full of blue crystals to a drug smuggling group. After having the drugs placed in a pouch in her abdomen, the bag bursts releasing large amounts of the drug into her system which in turn unlocks the deepest parts of her mind. It is said that we humans only use 10% of our brain and as the film progress Lucy uses more and more of her brain eventually reaching 100% as she takes on the smugglers who did this to her. Through unlocking her mind she could manipulate matter, move through space and time, read minds and so on.

I really enjoyed this movie. Scarlett Johansson was so intense in the role of Lucy and a bad ass!!! It was such a thought provoking film. It made me think about the whole idea of space travel and if there are other civilisations travelling to earth from far distant planets, how do they get here? One would always say that they must be thousands of years more advanced than we are here on earth to do so, so is it the ability to manipulate matter and create holes in time and space that allows them to get here?

The Matrix had many references to great philosophers including Rene Descartes In his book Meditations on First Philosophy, he asks the question of how can we as humans  know with certainty that the world we experience is not actually being forced upon us and here again in Lucy we see another philosophers theory in the form of Kant's philosophy that makes us aware of the fact that the first and essential laws of this world that are presented to us are rooted in our brain.

Full of action, very intelligent, and had debt to the storyline.

Thumbs up for this one!!!