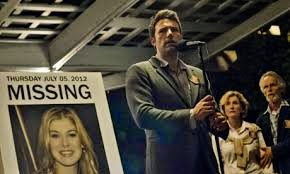 It's Nick Dunnes (Affleck) fifth wedding anniversary and he comes home to find his wife Amy (Pike) has gone missing. He reports it to the police and when a campaign is launched to find Amy it becomes a media circus. Nick eventually becomes a suspect and we ask did this man really kill his wife?

This movie packed a punch!! It was based on the novel of the same name by Gillian Flynn. A book I had not read so this movie really shocked me as it was not as straight forward a storyline as I was expecting. Standout performance had to be Pike as the missing Amy. This is one of those films where I really cant say too much for fear of ruining the plot for everyone as the less you know before going in the better but what I can say is that this is everything a psychological thriller should be and it felt like an old Hitchcock masterpiece. The back comedy is quite laugh out loud at times and the moments of shock could be heard echoing around the cinema from its audience.

I found the message very poignant of the power of the media and how the public can be so easily manipulated by the way a story is delivered. A truly powerful and absorbing movie and although long I did not feel the time go by as I was engrossed from beginning to end. 5 out of 5 and a must see!!!