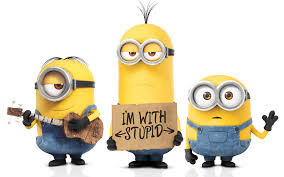 |Minions Stuart, Kevin and Bob are recruited by Scarlet Overkill, a super-villain who, alongside her inventor husband Herb, hatches a plot to take over the world (IMDB)

I had not seen Despicable Me 1 or 2 but I was always hearing how hilarious these Minions were and with all the hype surrounding the release of their very own movie I was dying to sit down for 91 minutes of laugh out loud belly laughs but sadly I was disappointed. The storyline of this movie was a limp as a dipped rich tea biscuit. I am a big fan of animated movies and this is the first time in a long time that I have sat watching one constantly checking the time to see how much longer I had to sit through it. There was the odd laugh here and there but not enough to hold my interest. Saying that, the kids loved it. The laughing coming from all the children in the cinema was so loud you could barely hear the movie at times, they were even dancing in the isles, which by the way is my one good point about the movie, the soundtrack was AWESOME!!! I only give this 2 out of 5, its yet another bleed the franchise for every penny we can movie. Not for me but as I said, judging by the kids reaction you won't go wrong bringing them to see it.