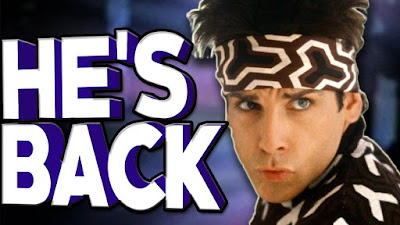 Former models Derek Zoolander (Ben Stiller) and Hansel find themselves thrust back into the spotlight after living in seclusion for years. Invited to a major fashion event in Rome, the estranged friends are surprised to see how much the business has changed. Even more shocking is their encounter with Valentina Valencia, a special agent who needs their help. Someone is killing famous pop stars, and it's up to Derek and Hansel to help save the world's most beautiful people from a similar fat.e

This is one of those moveis that you are either going to love or hate. It's over the top dumb comedy which some people love but its not for me. I do have to say though I could watch Ben Stiller doing the blue steel/Ferrari/Le Tigra/Magnum look all day and it will still make me laugh everytime but I'm afraid that's as far as the laughs went for me. The only other thing that held my attention was spotting the celebrity with all the cameos in the movie.

We had the addition of Valentina in the sequel played by Penelope Cruz who is not a comedy actress and I think they would have made a better choice casting someone who was actually funny in the role plus I don't know what the woman is saying half the time.

Jennifer Aniston's husband Justin Theroux was part of the team who wrote the screenplay. He has a part in it with very little screentime and I would have liked to see more of him in the movie because he is one funny guy. I loved him in Wanderlust.

So if you loved Zoolander I'd say you will love this too. Just not my kind of comedy but there is an audience for it.