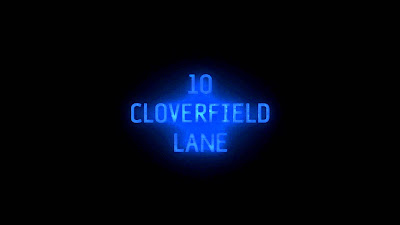 After getting in a car accident, a woman is held in a shelter with two men, who claim the outside world is affected by a widespread chemical attack.

Back in 2008 we had the very cleverly marketed Cloverfields release, a movie I did not watch simply because I am not a fan of found footage films. So when I heard 10 Cloverfield Lane was coming out I just assumed it was a sequel so it was not on my radar. Over the last week I've seen so many people posting really positive comments about this movie on facebook that I had to go check it out for myself.

Well what a great decision that was because this movie is amazing. While 10 Cloverfield Lane is indeed part of the Cloverfield franchise it is not a direct sequel. It does not build on the storyline of the previous film but is rather just similar in spirit. It was developed from a script called The Cellar to fit into the franchise. So long story short no you don't have to have seen the first movie to watch this because there really is no connection.

This movie is excellently directed by Dan Trachtenberg and he is certainly going on my one to watch list. John Goodman and Mary Elizabeth Winstead gave outstanding performances. It's the kind of movie that keeps you guessing. The tension throughout holds your attention and it is also not short of shock moments and jump scares. I can't really go into too much detail without giving anything away but for a movie I had no interest in watching, I will most certainly be talking about this for quite some time. Make sure you catch it on the big screen.