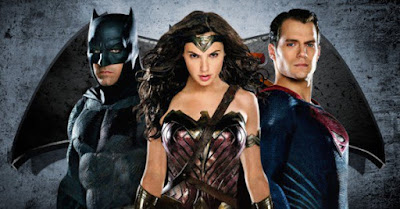 Fearing the actions of Superman are left unchecked, Batman takes on Superman, while the world wrestles with what kind of a hero it really needs. With Batman and Superman fighting each other, a new threat, Doomsday, is created by Lex Luthor. It's up to Superman and Batman to set aside their differences along with Wonder Woman to stop Lex Luthor and Doomsday from destroying Metropolis.

As I said at the start of my Man of Steel's glowing review, I do not read comic books. My love and knowledge of superheroes comes from movies, TV shows and cartoons so I do not have the same knowledge of the whole history of Batman and Superman's relationship as many comic reading movie goers will but that being said here is what I thought!!!

After almost three years of anticipation for this movie I was left feeling like a child who got up on Christmas morning to find that Santa didn't come. I loved Man of Steel so of course I had great hopes for this movie but from the word go I had issue after issue as did most of the audience at the midnight screeening at Mayo Movie World.

Firstly what was it missing? Heart, Warmth and Humour. Three things vital for me in a super hero movie, look how right Guardians of the Galaxy got that. This is why so many people my age are obsessed with old 80's movies from our childhood because they oozed these three elements.

At times I wondered to myself had I fallen asleep and woken up in a Robocop movie because this is what Ben Afflecks Batman is like only not the likeable character Robocop is. He was totally devoid of Bruce Wayne/Batmans charm and was 100% the wrong casting choice but we also have to give the writers blame for this disaster.

The first hour and a half of the movie could have been cut down to half an hour. The build up of the story was far too long and I was completely bored by the time they got to the action. I started to get some hope when the battle between Superman and Batman begun but once again these scenes were so dragged out I lost interest again. And as for the doomsday battle, far too long again and the most exciting moment was when Wonder Woman showed up but I am still not sold on  Gal Gadot as the character but we did not see enough of her for me to have a solid opinion so I'll have to wait and see her solo outing before I can give a better opinion on this.

In Man of Steel I did not think Amy Adams would make a good Lois Lane but was actually pleasantly surprised but in Batman V's Superman I found her annoying and nothing like the ballsy journalist we all fell in love with in previous versions of the Superman Franchise. As for Jeremy Irons as Alfred, well that man could read the phone book and I'd enjoy listening to that voice so he escapes my criticism. And as for Jesse Eisenberg as Lex Luthor, well he's not exactly the greatest criminal mind of our time. He was more like a schizophrenic spoiled little boy. Henry Cavill was also very different in this movie and for me lost all the heart he put into the character in Man of Steel.

Batman V's Superman is a mess of a movie and I feel I need to go and have a Christopher Reeves Superman Marathon to cleanse myself.