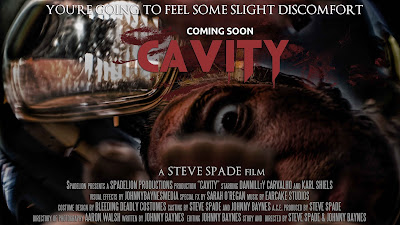 
The Dentist. The worst fear of the majority of the population and in this short film from Limerick based Spade Lion Productions the experience of sitting in 'that' chair is perfectly captured.

The film starts with a girl  (Carvahlo) strangely enough, pulling out her own tooth and then going to what can only be described as the creepiest most sinister dentist imaginable played superbly by Karl Shiels (Stitches,Veronica Guerin) Many of the scenes are filmed from the patients perspective with the sound of the drill ominously heard in the background as she watches the dentist prepare the injection and for anyone like myself who has had a nightmare dentist experience this will truly hit home. But another factor of sitting in the chair is what is the dentist doing when he goes over to his station with the tray, well I won't spoil it for you but this reveal is a quite gruesome scene.

Shiels is the dentist from hell but all is not as it seems.

I thoroughly enjoyed this short film. The fact that we can all relate to that fear will have you cringing and of course we all love a good twist to a tale. Looking forward to seeing more from Spade Lion Productions.