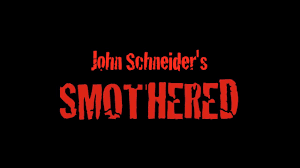 Five horror icons ditch an unprofitable autograph signing convention to earn some extra cash haunting an RV park, but find themselves being haunted instead.

It was John Schneiders intention to make an 80's style comedy/horror and in Smothered he got that mix just right.

Firstly having Kane Hodder as the love interest of the movie was surreal but then when you throw in R.A. Mihailof scared of his own shadow these two guys just steal the show. That's not to say that each of the other actors didn't have their own hilarious moments and I have to give special mention to Bill Moseley who was awesome. Also the one liners had me cracking up.

The kills were very inventive and with the movie being 99% practical special effects this will make most horror fans happy campers :) For those of you who attend horror conventions you will see that Schneider has truly conveyed the experience in this movie from the cosplayers to who's the biggest star this year to fans trying to get free pictures outside, you guys will get it lol

Over all I say great story, hilarious performances, original idea and a must see for all horror fans. I can't wait to see what comes next from John Schneider Studios.

Have a listen to my interview with the man himself in the link below.