Love in the Time of Monsters Review 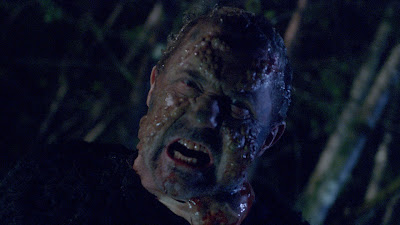 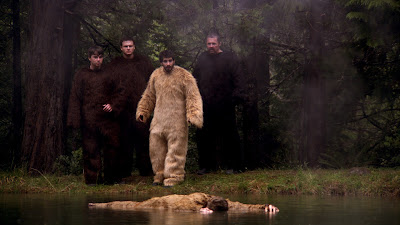 When the two sisters Marla (Gena Shaw) and Carla (Marissa Skell) were kids they lost their Father in a freak accident at a roadside attraction. 15 years later the girls take a trip to Uncle Slavko's All American Family Lodge. The purpose of the trip is to surprise Carla's finance Johnny who works there as one of the big foot characters tourists meet on the tour in the woods. Unknown to the girls the team of big foot impersonators led by Kane Hodder (Friday the 13th, Hatchet) have fell into a lake full of toxic waste which has turned them into unstoppable psychotic killers. The race is on to try and save Carla's finance Johnny before it's too late. 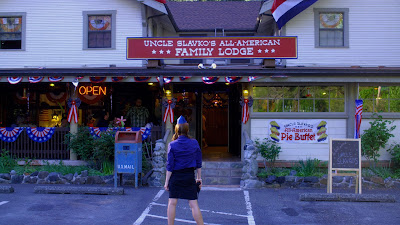 Getting the mix of comedy and horror right is not an easy task but I think director Matt Jackson and writer Michael Skvarla were successful in what they set out to do. This movie was extremely witty never going too OTT to the point that you just loose interest because it is too stupid to watch. It was well paced with a good script and great actors. I particularly loved Doug Jones (Pans Labyrinth) as Dr Lincoln. Obviously highly influenced by classic 80's horrors and consisting of one of the things most important of the 80's genre - it had heart!!! When the movie started it actually reminded me of that episode of Buffy, The Pack, where Xander and a group of other students get possessed by demonic hyenas. But, I digress.

Comedy aside there are some great kills and of course practical special effects. There is always a good decapitation in any movie Kane Hodder is in lol. All in all, a funny movie that doesn't take itself too seriously, lots of laughs, lots of gore and a hilariously violent climax.