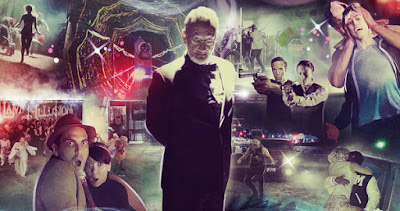 Six of the worlds scariest psychopaths escape from a local Asylum and proceed to unleash terror on the unsuspecting crowd of a Halloween Funhouse whose themed mazes are inspired by their various reigns of terror.

Comedy Horror at its best!!! This movie is right up there with Adam Green's Hatchet for me. A true gem that I am sure will be in every horror fans Blu Ray collection. Another prime example that indie horror is where its at and it is so important for us to support it.

Firstly we are introduced to all the psychopaths by an absolute horror icon - Robert Englund (A Nightmare on Elm Street, V) and if that isn't enough we are also treated to amazing practical special effects from SFX Master Robert Kurtzman (Wishmaster, A Nightmare on Elm Street 5) The cast of this movie are so likable and are fantastic at holding the atmosphere throughout as well as delivering some brilliant quotable lines.

Ben Begley not only wrote the story and screenplay he also plays hilarious Deputy Doyle who delivered some of the funniest scenes in the movie. But along with consistent comedy throughout there is also a blood feast of horrific imaginative kills that will not disappoint.

I also have to give special mention to Candice De Visser who played Dollface/Ms Quinn. Playing an utter psychopath is no easy task, there is always the risk of it coming across either too over the top or simply completely fake but Candice made her character come to life superbly.

An indie-gem for the nostalgic 80's horror fan!!!

Email ThisBlogThis!Share to TwitterShare to FacebookShare to Pinterest
Labels: The Funhouse Massacre Review