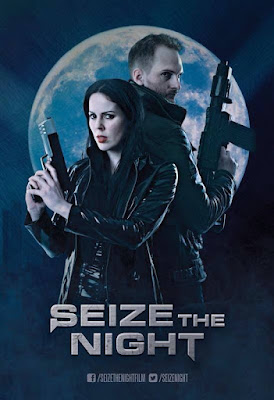 Renegade vampire assassin Eva has escaped from a secret bio-research compound. Hell bent on revenge she learns a terrible secret that may force her to unite with the devil she knows in order to defeat the greatest of all evils.

Inspired by movies such as Underworld and Blade, Seize the Night is visually spectacular from start to finish. Emma Dark has achieved such an impressive high production value on a small budget. The film has that same bluish tone as Underworld which set quite a sinister atmosphere. But even though I am making these comparisons this is not a copy cat tale of Vampires and Werewolves, Emma puts her own stamp on it.

As well as her many other roles Emma played the lead role of Eva who was pretty bad ass dressed all in leather with an attitude that bites. The fight scenes in the film were awesome and choreographed by Roy Scammell who has spent over 6 decades in the movie business and has worked on films such as Alien and Clock Orange.

Seize the Night is a short that you would just love to see made into a feature film. With all it's characters, action and suspense I can only imagine what Emma could do on a large budget.