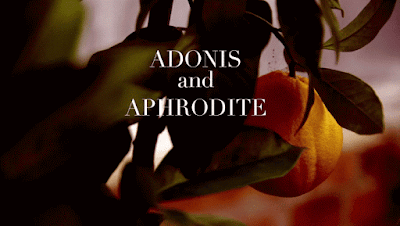 This short is set in a greenhouse with Madeleine Bowyer playing an un-named housewife, telling the tale of Adonis and Aphrodite, a rich Greek couple who moved into her neighbourhood.

Following a lavish party, the Greek couple hosted for the neighbours this housewife and her husband were thrust into a world of swinging which escalated into much darker escapades.

When the film first started I was wondering where is this story going but in the true style of David Chaudoir the plot is full of  twists which just get darker at each turn. As this is a monologue I can't really go into too much detail about the film without ruining it for you but what I will say is Madeleine Bowyer gives a terrific performance and Chaudoirs script keeps you engrossed in the story as you are dying to know what happened next.

This is the second film I have reviewed from David Chaudoir, the first being Bad Acid and I really look forward to seeing the first feature this very talented writer and directer releases.
4/5