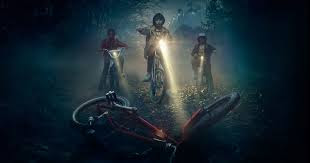 The Netflix original series is set in an Indianapolis town in 1983 where a teenager by the name of Will Byers goes missing under mysterious circumstances. A search by the town police and Will’s three friends gets underway but they soon realise everything is not as it seems. They come across a series of terrifying mysteries, government cover ups and a little girl by the name of Eleven with supernatural powers taken straight out of a Stephen King novel.  The show stars Winona Ryder, David Harbour and Natalia Dyer.

When I first saw this on Netflix I wasn’t really too sure what to expect. I had a feeling it would be overly cheesy and the child actors would be awful. I saw the five star rating and thought it would drop swiftly. Even Adam Sandler films have five star ratings on Netflix so I wasn’t too convinced. After hearing some good things about it and watching a few trailers I put aside my doubts and watched the first episode. This lead to a marathon session of eight hours of amazing television.

To start off the performances are fantastic. The show’s child characters Lucas, Mike and Dustin all have fantastic chemistry and are a joy to watch. They are the classic eighties trope patrol straight out of Monster Squad or The Goonies. They are witty, charming, awkward and drive the show forward. I really hope to see more of these actors in the years to come. Winona Ryder has not done anything special in the past ten years or so but she does a great job playing the grief stricken mother on the brink of insanity. She steals every scene she’s in and acts her ass off. Millie Brown plays Eleven. Think Carrie meets Professor X, a government experiment gone wrong. She adds a great amount of mystery and vulnerability to the show which mixes very well with The Goonies 2.0. Each and every actor puts in a stellar performance, if I was to go through them all we would be here all day.

On a technical level this show is incredibly impressive. Each and every shot and scene transition is interesting, the special effects are very realistic and the character design of the main monster reminded me of The Majini from Resident Evil 5. The difference though is this monster is actually scary, unlike Resident Evil 5. The lore inside the universe is compelling and the story line is unpredictable. Every time I thought I knew where the show was going it took a swift left turn which kept me gasping at every twist.

The real star though is the nostalgia. Stranger Things is heaven for every fan of eighties horror and Sci-Fi. From posters from Films like John Carpenter’s The Thing to establishing shots reminiscent of the opening of Star Wars and little Easter eggs from films of the time. I won’t spoil them but there is a nice Alien reference in the last episode which was pretty cool.

Over all this show is fantastic. From the performances, special effects and even down to the opening credits and soundtrack. Stranger Things is a compelling watch for any lover of the eighties like myself. I thought this would be a parody io the standard eighties horror/Sci-Fi film but turned out to be more of a love letter.
If you are going through withdrawals from Game Of Thrones or The Walking Dead and you love the eighties then this is the new show for you. I’ll happily give Stranger Things a 9/10.