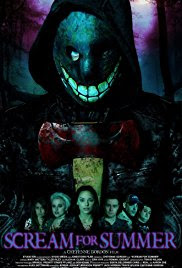 In a small Ohio town, a group of friends plan to party the summer away now that school has finally ended but a masked killer has other plans.

This low budget independent horror film comes from first time director Cheyenne Gordon. A love letter to the Slasher movies of the 90's. Cheyenne has written a really good story here with a great killer reveal. The movie is very character based but I feel a bit too much time was spent building on their backstories, I see what Cheyenne was doing, making the audience build an affection for each character so we actually care whether they live or die but it made the film seem a little dragged out.

Mary Watters stood out in her role as Sam Willis. Mary is a very natural actress and nothing seems forced in her performance but I am afraid to say there are a few of the cast that could benefit from some acting classes.

The production company behind the movie is Studio 605 but again I feel they let Cheyenne down with bad sound especially during phone call scenes.

All in all, I really like Cheyenne as a dircetor, writer and actor. And keeping in mind this is his first attempt I look forward to seeing his next project hopefully with a different acting crew.